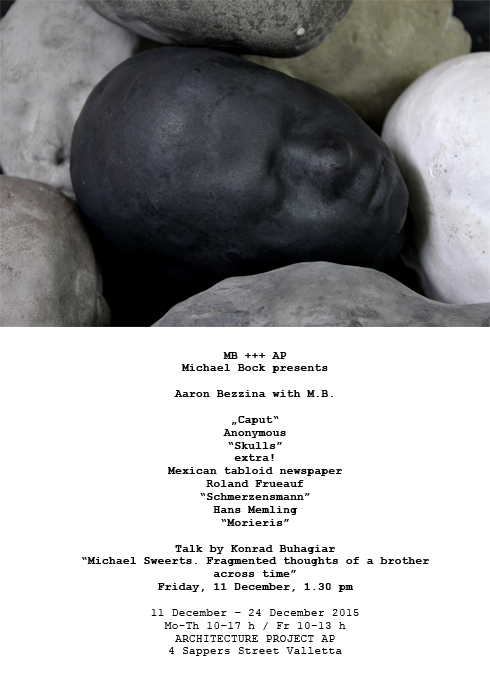 “This exhibition tries to deal with the impossible in a most modest way. It reflects some sort of grappling with what has been and what is hitting the mass media around the world these days, and also touches on related events: upcoming nations' wars, wars, proxy wars, civil wars, 'religious' wars, revolutions, state terrorism, terrorism of specific groups, fratricides, rebellions, uprisings, civil demonstrations in many countries, and their deadly results: genocidal killings, tortures, disappearances, people suffering, being maimed, their lives torn apart, who have lost all their livelihood being forced to

The exhibition attempts to pay homage to the many perished victims of horror, those not even being counted, the nameless victims, many if not most of them ignored by the media, including the anonymous survivors, those left behind suffering from a trauma, men, women, children.

The exhibition consists of a recent illustrated article from the Mexican tabloid newspaper ‘, anonymous graffiti, reproductions of paintings by the Flemish artist and Austrian , and two site-specific installations, a collaboration between and . The works presented span a width from graphic realism to sublime to spiritual.”

There will also be a talk by AP’s , titled ‘. Fragmented thoughts of a brother across time' referring to the symbolism of body fragments as depicted in paintings of Flemish baroque artist and the sculptures of this exhibition by Maltese artist

1
He may have been wounded at a battle , sheltered and cured by the St. John Hospitallers at Bruges, Belgium for who he had painted a picture showing his gratitude. This forms a welcome connection with the later arrival of the Order of

2
Coincidentally on a December 11, the day of this exhibition's opening, US-American Oliver Winchester died; he was the inventor of the famous Winchester Model 1873 rifle gaining the reputation as “The Gun that Won the West of the US”. Ironically enough, the same day Christian Lous Lange died who could be called the antagonist of Winchester. He was a Norwegian historian and political scientist who was often called upon for his expertise in arbitration and arms control, in particular. He received the Nobel Peace Prize . During the occupation of Norway by Nazi Germany his daughter Thora joined the resistance movement and was imprisoned in a German