Architecture is for
the Faithful

AP’s Guillaume Dreyfuss presenting the poster at the ‘Religious Heritage – Europe’s Legacy for the Future’ conference in Paris. 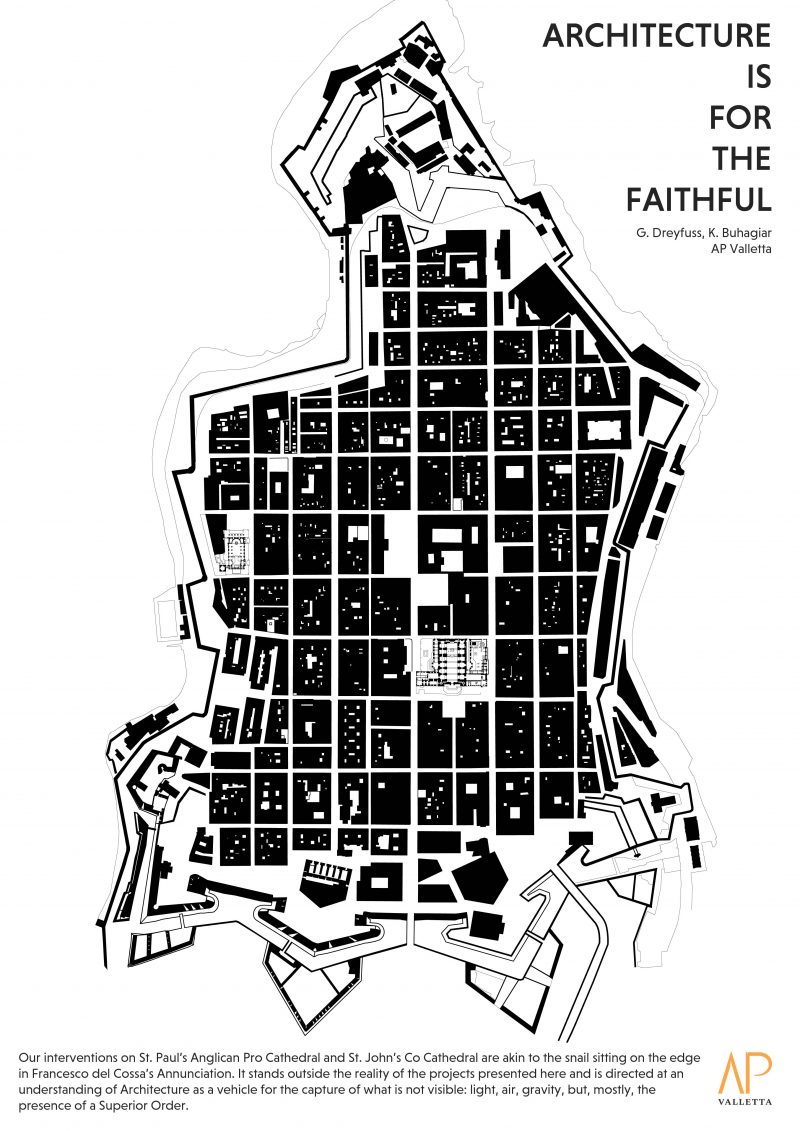 Two religious sites, one island: Malta. On the abstract co-written with Konrad Buhagiar, Guillaume focuses on two of AP’s current most important projects, the refurbishment and extension of and the restoration of St Paul’s Anglican pro-Cathedral, the two main religious sites of Valletta. According to the authors, “Both interventions will contribute considerably to the evolution of these concepts of Faith and, following over a century of antagonism, to

In the occasion of his presentation, he will retrace the history of these two monumental cathedrals and their role in society and

The conference aims to be an occasion to debate and learn, with professionals and students from all over

Architecture is for the Faithful
AP is currently intervening on St John’s and St Paul’s Anglican , the two main religious monuments of Valletta. Both projects are the product of deep-rooted concepts of Faith that linger strongly in local religious and social mores and are embedded in the stones of these buildings. Both interventions will contribute considerably to the evolution of these concepts of Faith and, following over a century of antagonism,

When Isabella Infanta of Spain, collaborated in the early 1620s with Peter Paul Rubens to design a set of tapestries that would describe the Triumph of the Eucharist, this was conceived primarily as a tool to counter the onslaught of the Reformation. More than half a century later, Ramon Perellos y Roccaful commissioned another set of these tapestries as a gift to the co-Cathedral of St John on his election as Grand Master to the Order. His intention was to add a sumptuous touch to the interior of the church whose walls, vault and floor had been, over the previous decades, covered with polychrome marble sepulchral slabs, gilded sculptural decoration, and paintings by artists such as and Caravaggio. Today these great artefacts of the Baroque age constitute the only full set of these designs by Rubens

Over a century and a half later, Queen Adelaide, following her visit to Malta in the winter of 1838/39, founded and financed a Collegiate church in the Anglican tradition. The British Government provided a site and Queen Adelaide laid the foundation stone on . There is no building more symbolic of the presence of the British on the island than St Paul’s pro-Cathedral. Its elegant steeple, designed by William Scamp in the neo-classical tradition, is the most iconic element on the Valletta skyline, a lofty needle, piercing the Mediterranean sky. The Cathedral miraculously escaped serious war damage, and since then, has stood silently, a heroic testimony to the combined contribution of the Maltese and the British to the great events of the last

Our intervention is akin to the snail sitting on the edge in Francesco del Cossa’s Annunciation. It stands outside the reality of the projects presented here and is directed at an understanding of Architecture as a vehicle for the capture of what is not visible: light, air, gravity, but, mostly, the presence of a