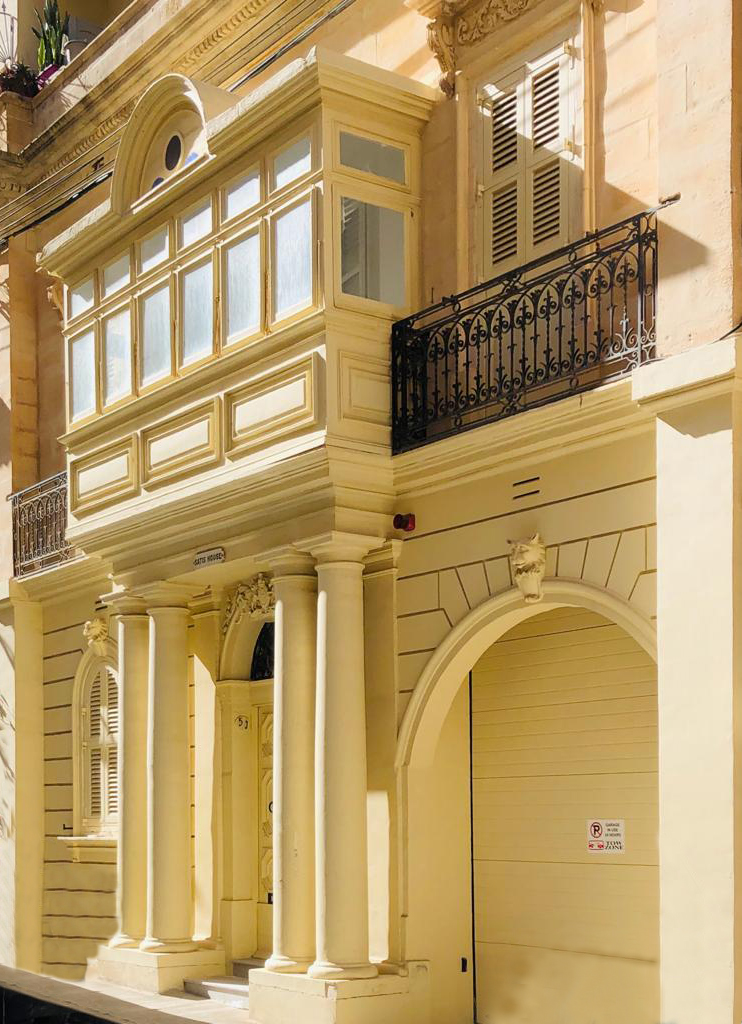 This penthouse in Sliema guards the spirits of the old dimora and its former inhabitants while being adapted to accommodate the new owner’s needs.

The old two-storey house lay vacant for over a decade after the mother of the current owners passed away. It has now been converted into apartments behind the original facade in such a way as to allow the three brothers who were brought up in this house 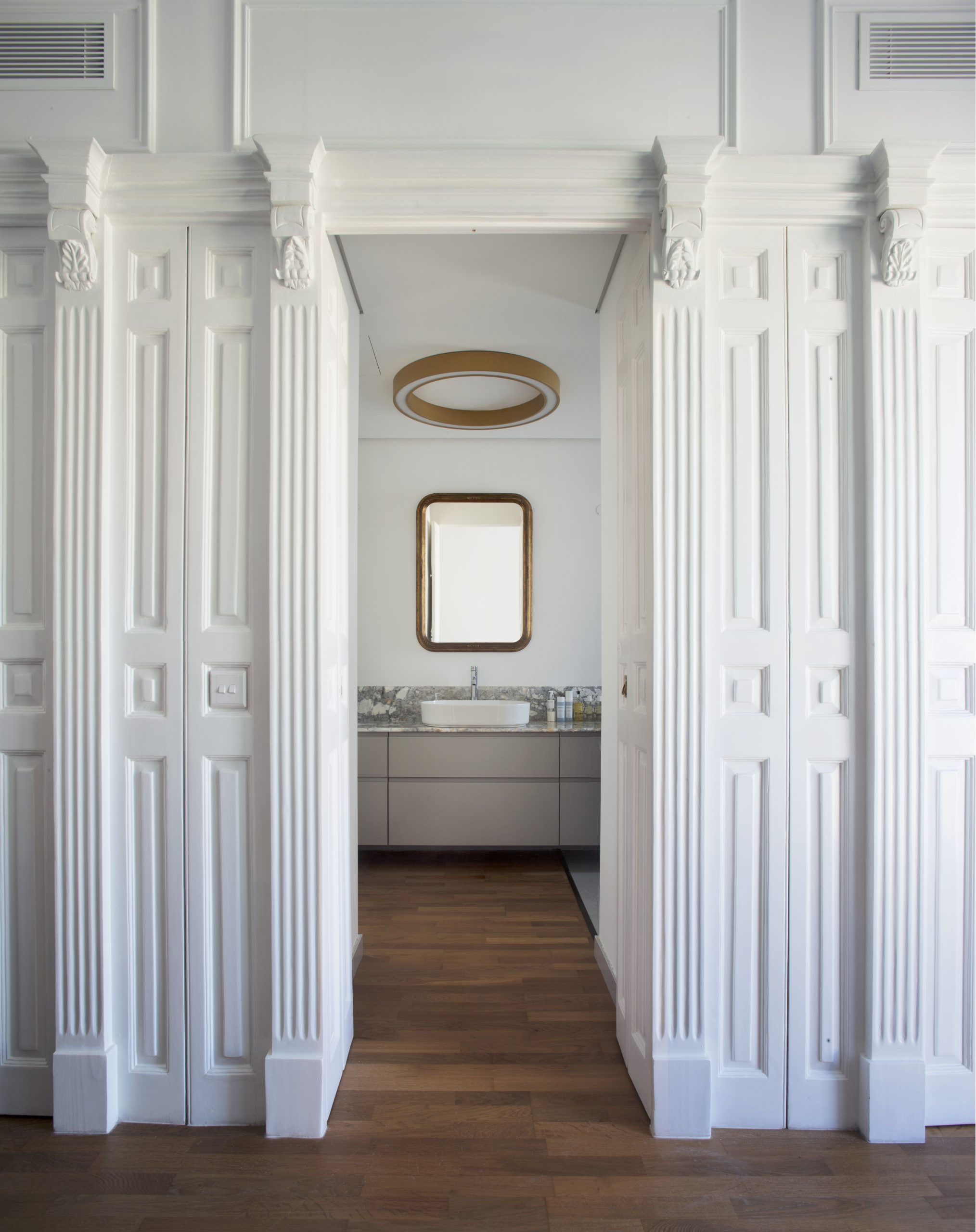 This penthouse overlies the other apartments and retains a number of elements from the original house. The sculpted lions, once at roof level and crowning the composition of the old facade, were restored and are now guarding the new terrace at roof level. The old iconic were recycled and refitted in the new space to create the bedroom wardrobes and door to the en-suite bathroom. Other pieces of furniture belonging to several generations and to different members of the family, such as a desk and Biedermeier bench were also reused 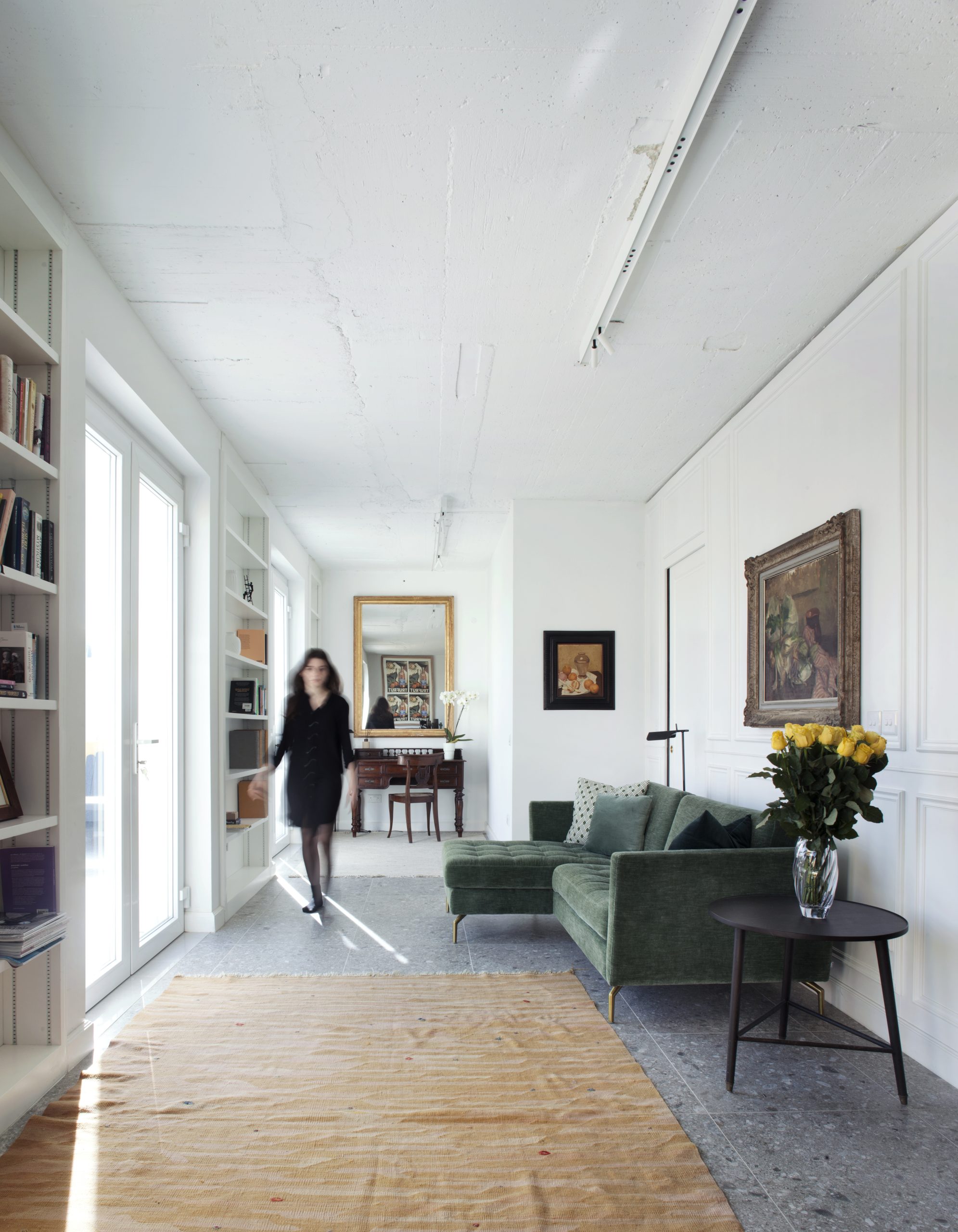 All these elements handed down from the past now form a new composition with the contemporary space which consists of an volume housing a studio and living area on one side and kitchen and dining-area on the other. These spaces benefit from a double exposure, light streaming in from the terrace on the living side and the back balcony 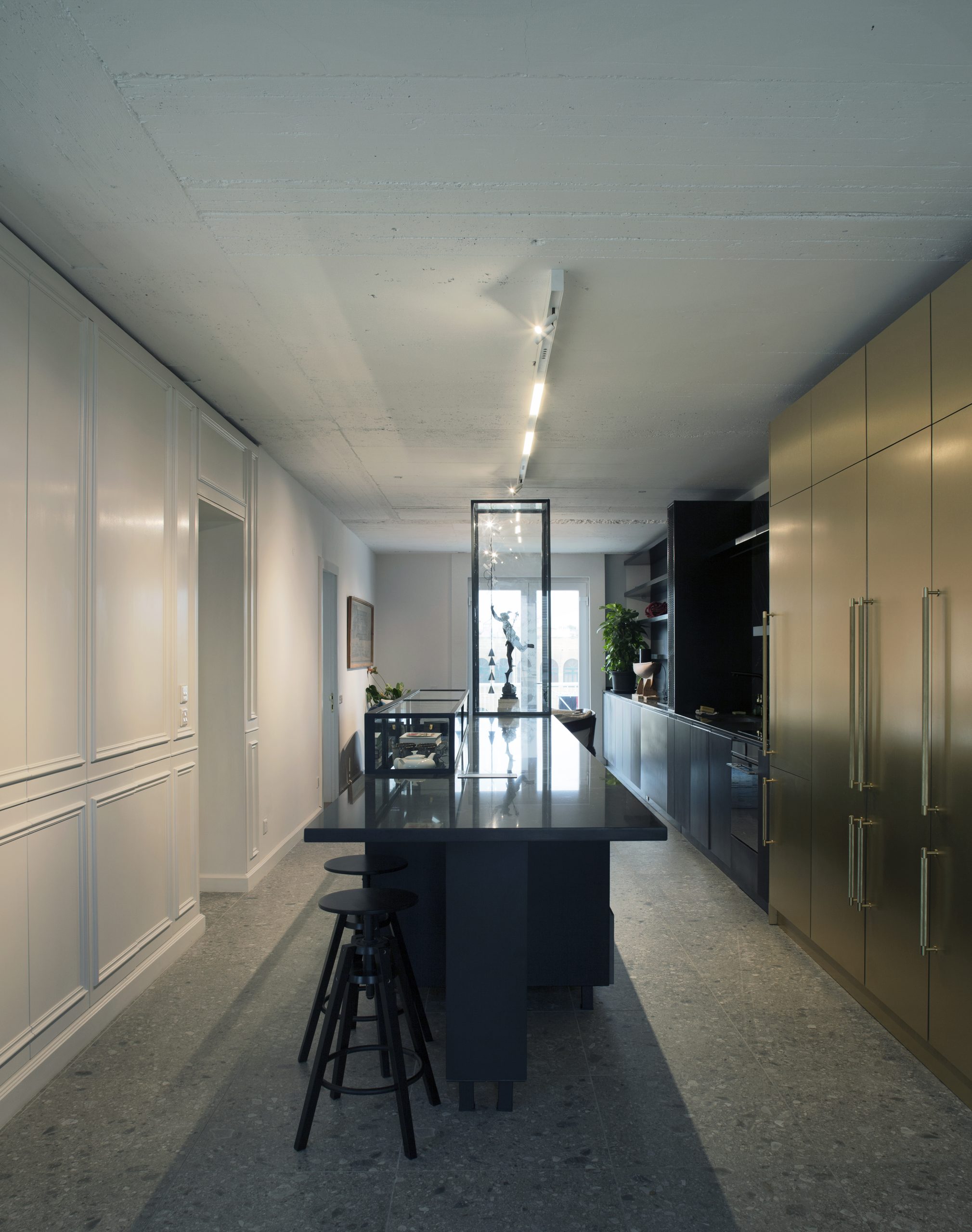 The bold kitchen unit in the centre of the long arm of the L-space works as a cooking island, bar, Dj stand, vitrine for the exhibition of precious art objects and library for ancient books. It is a form of sculptural installation that blends the boundaries between all these various functions.

Its slick appearance together with the gold-leaf cupboards and fridge, contrasts with the rough terrazzo floor and textured off-shutter concrete of the ceiling. Sharp industrial-industrial-looking storage cupboards run along the long wall of the apartment and mirror the more classical panelling on the opposite wall that evokes the fin-de-siecle character of 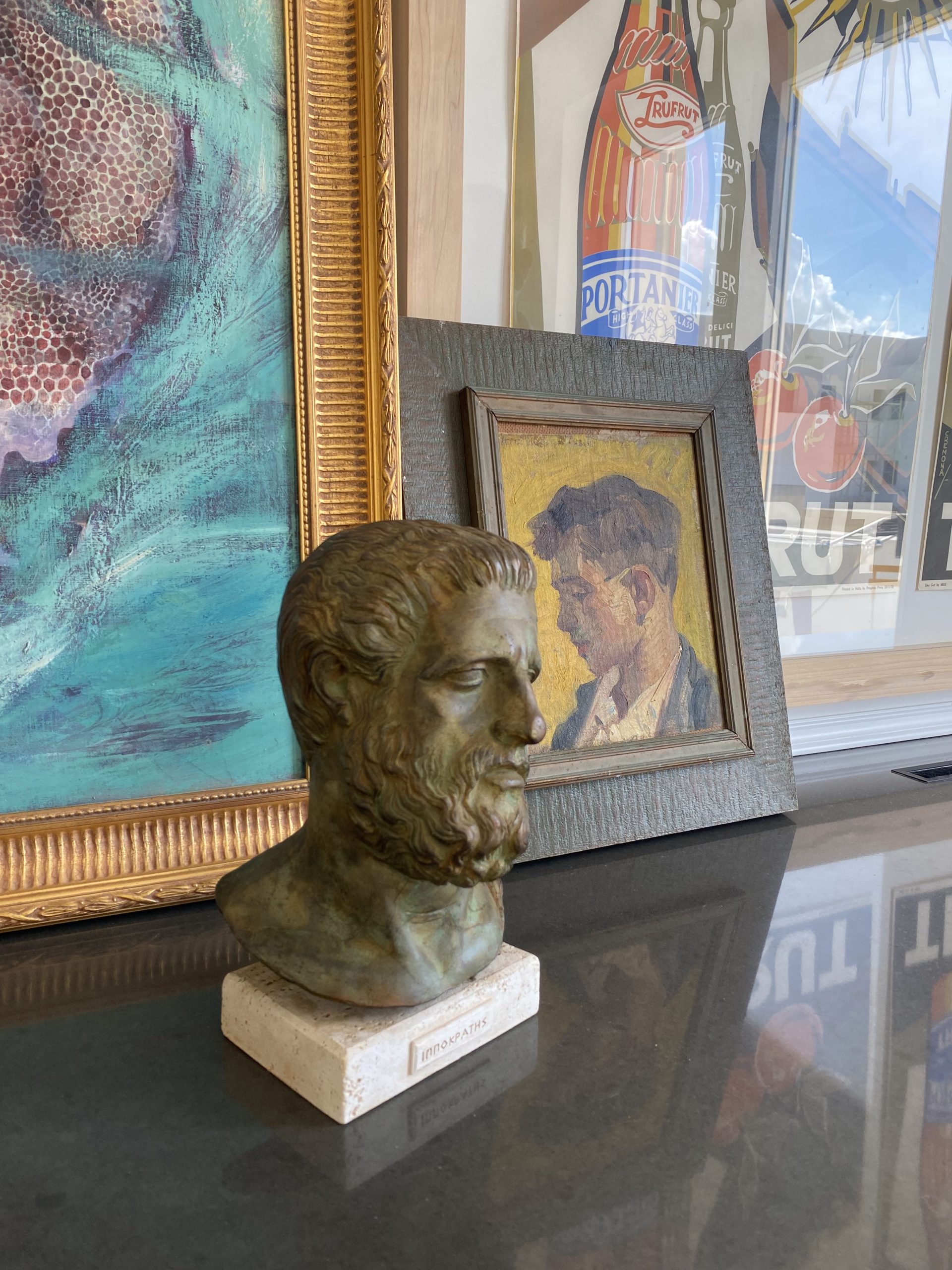 The distinctive character of the flat is the product of all these disparate elements that seem to have survived from different epochs, thus softening the edges of the newness of the interior and providing it with the depth habitually considered the domain of

A Home in the Middle of the World -

The street we lived in when I was a small boy was called although there was nothing new about it by the time I came into the world. Two rows of similar terraced houses, two storeys high with projecting stone cornices and timber balconies, stepped gently down towards the waterfront promenade. From here one could descend a steep rusticated staircase down to the rocks and the water's edge and dive into the icy-cool water of early June, or the flat-calm, silky September sea for a blue moment

In my little head I had drawn up a map of the unhurried world I knew. It was small and defined, surrounded on three sides by the arc of the promenade and the sea beyond. You could glimpse a square patch of blue as you looked down our street or either of the two lateral streets that traversed it, dividing it into three sections of equal length. The top of the street was more closed and mysterious but I was aware of more building behind it that formed a suspicious area referred to, perhaps unfairly,

In this innocent town-plan, New Street was the axis of symmetry. Each section of the street became progressively narrower as it ascended the hill: a grand classical villa belonging to a very rich lady occupied the first third of the street. My brothers and I used to walk down unaccompanied to the beach in the shade of its leafy trees and bougainvillea reaching out beyond the high garden walls. In the topmost and narrowest stretch, I imagined poorer, less charming people, who lived perilously close to the

We, on the other hand, were the happy and industrious ones in the sunny middle third of the street and our house was located in the middle of it. There was no other house quite like it. It was the only one with coupled Tuscan columns flanking the entrance and a sculpted coat-of-arms of the British Empire surmounting the main door together with the name of the residence,

My mother often reminded us that this was the name of Miss Havisham's house in Great Expectations by Charles Dickens, and warned us of the dangers of hanging on too tenaciously to the past. She also explained that Satis was the Latin origin of the English '

They say that the middle child always has a hard time battling with the demons on the periphery. This may be true for although my position in the middle was comfortable and stable, my curiosity soon pushed me out of the nest. I look back on those secure and carefree childhood years with nostalgia, but Miss Havisham's tragedy was a lesson on how priceless is the exciting, albeit sometimes painful, world that exists outside the settled 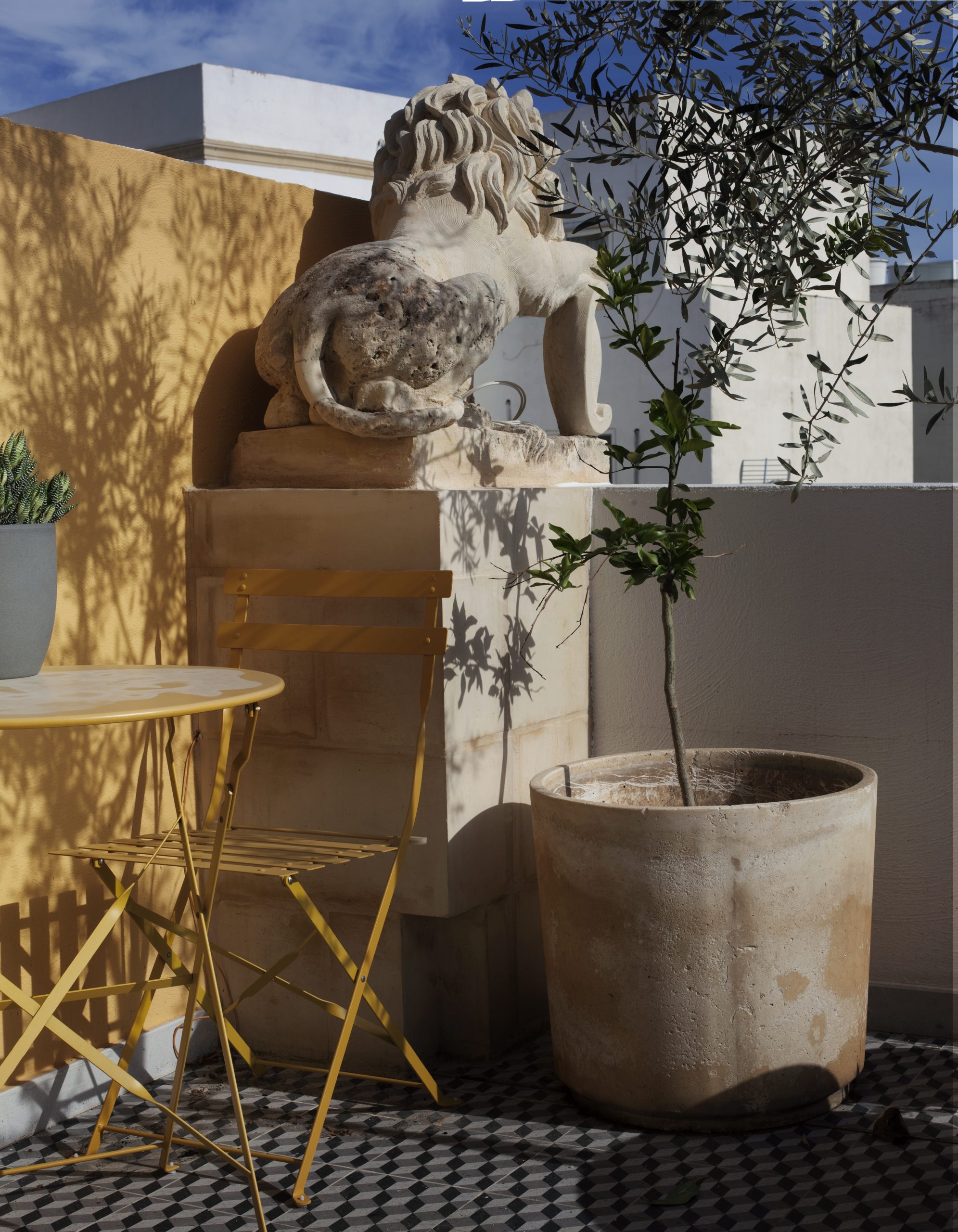 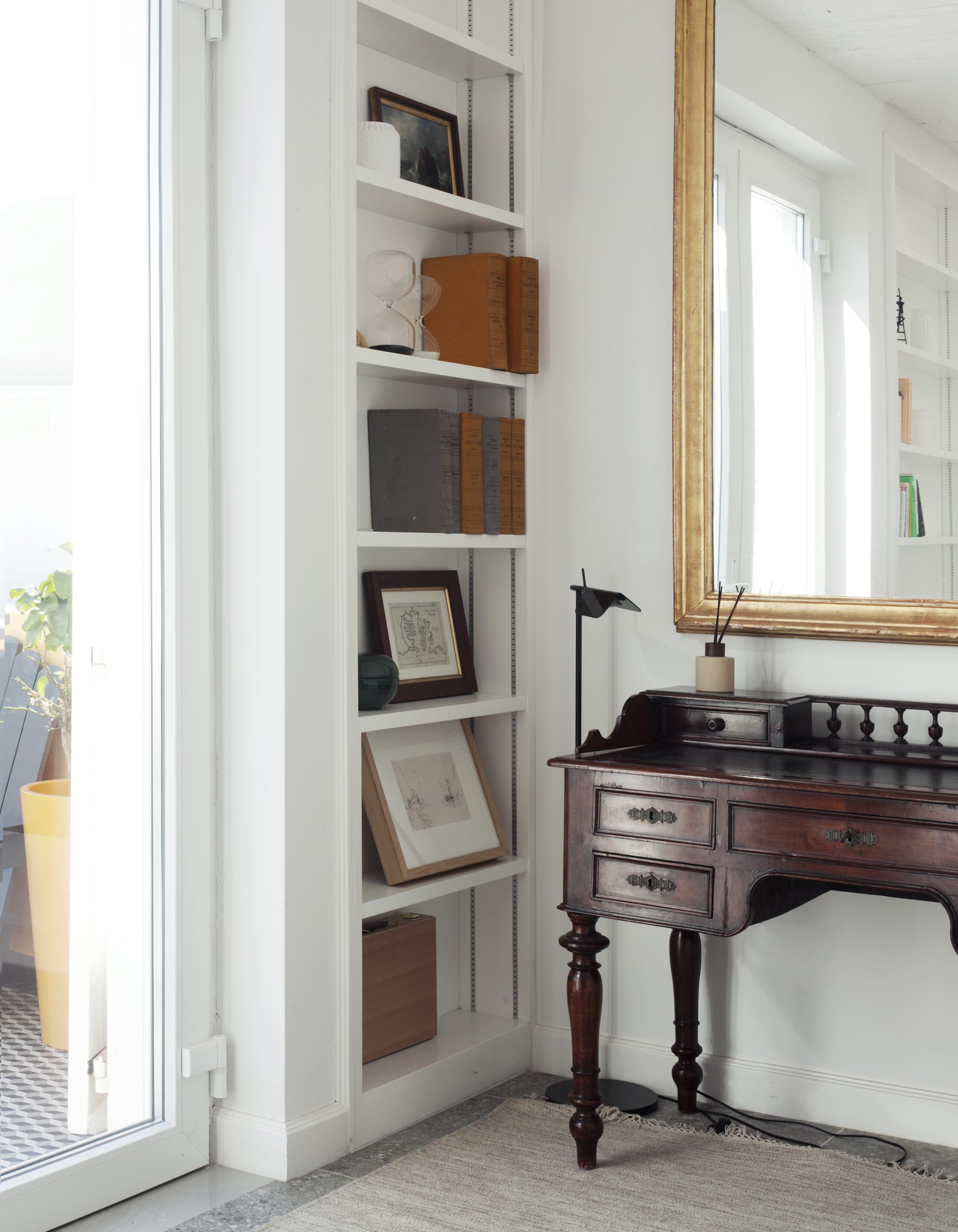 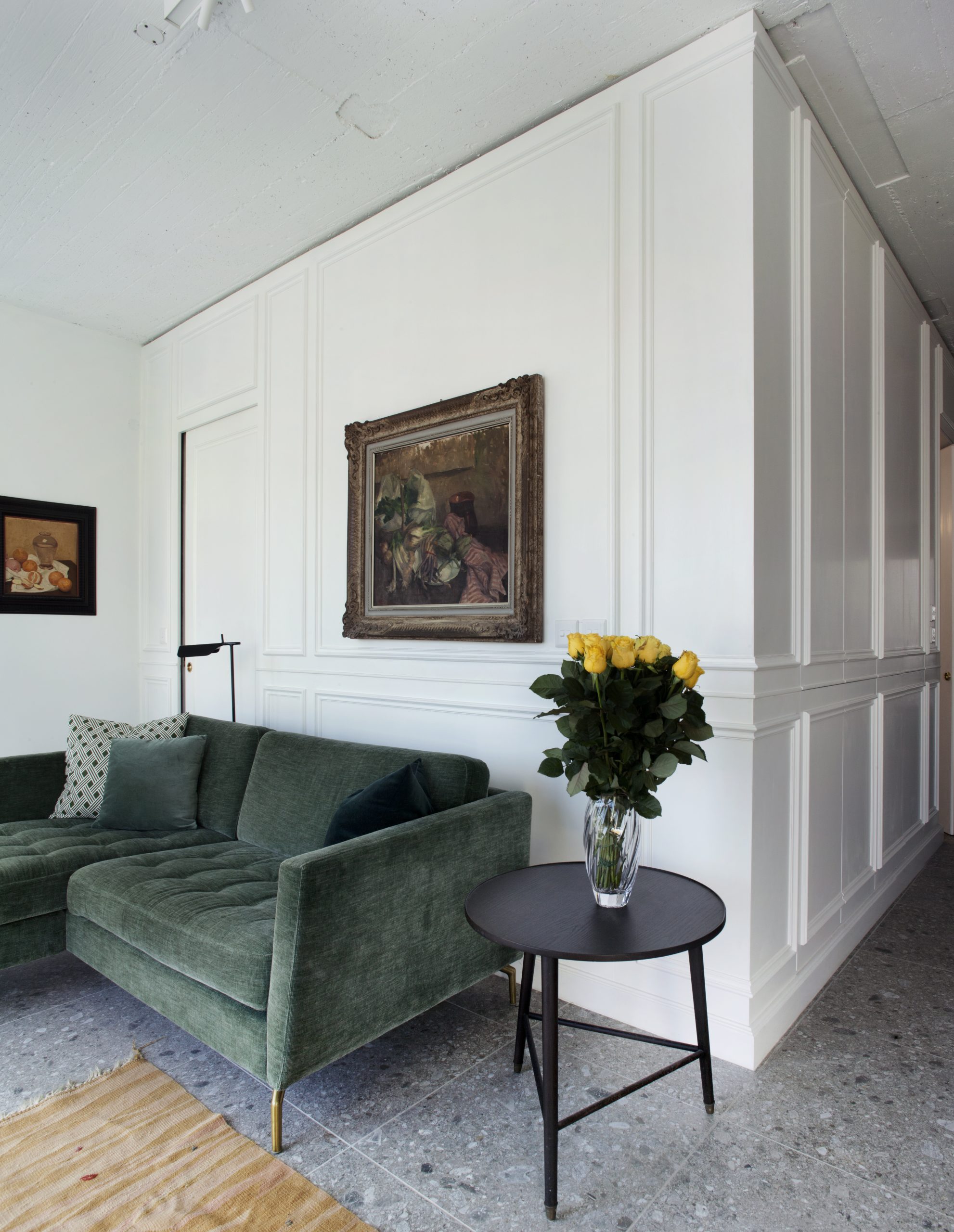 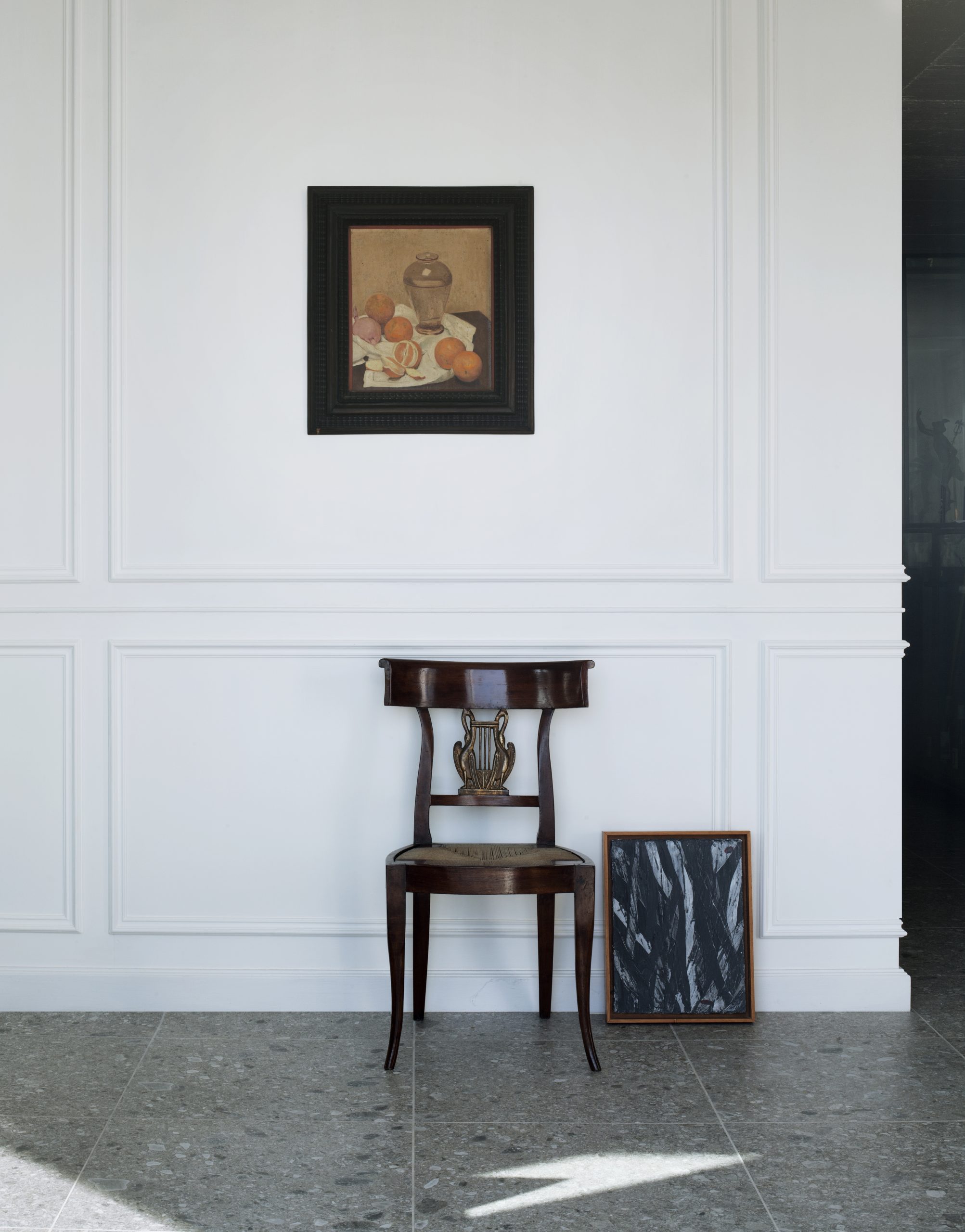 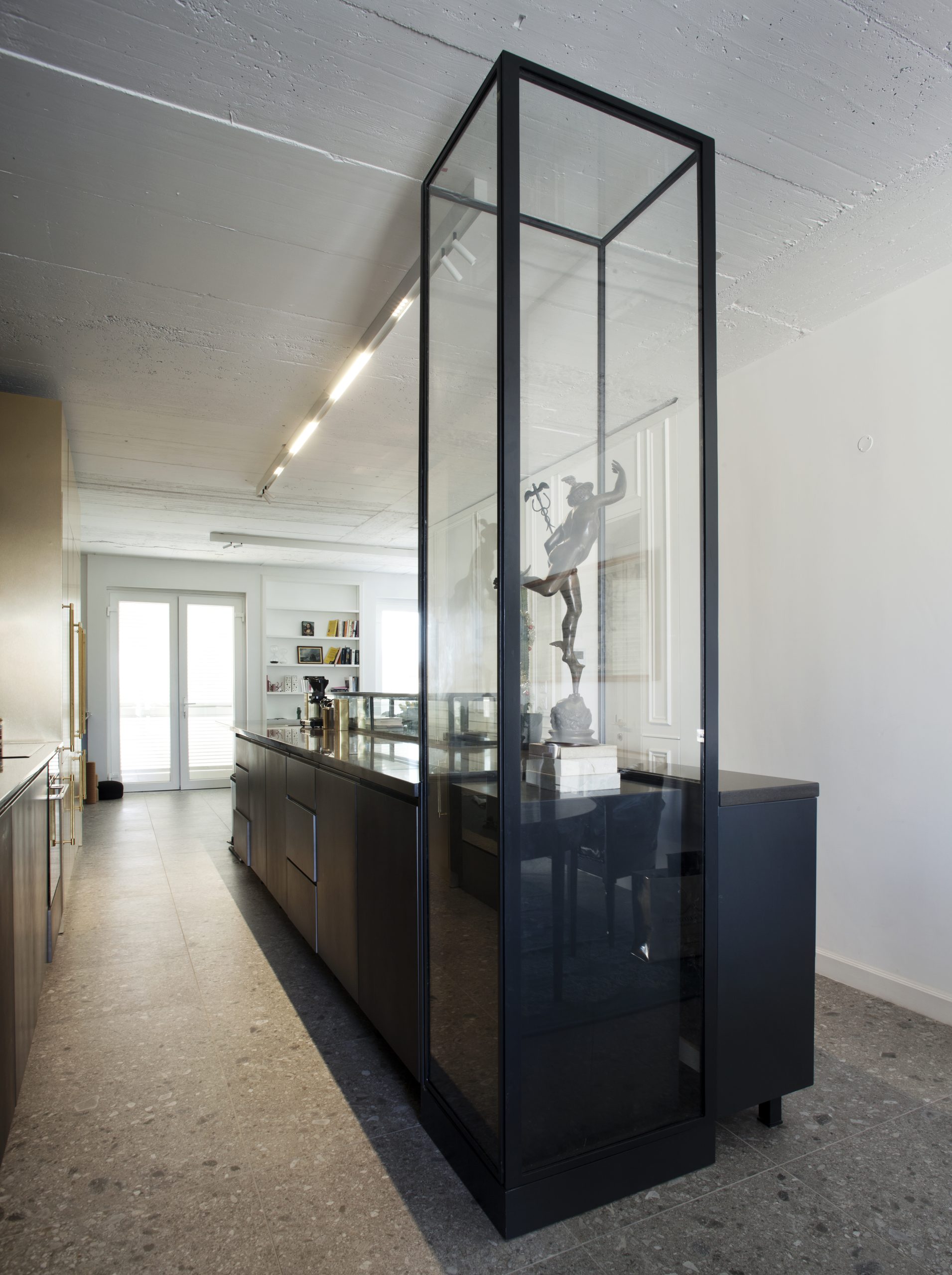 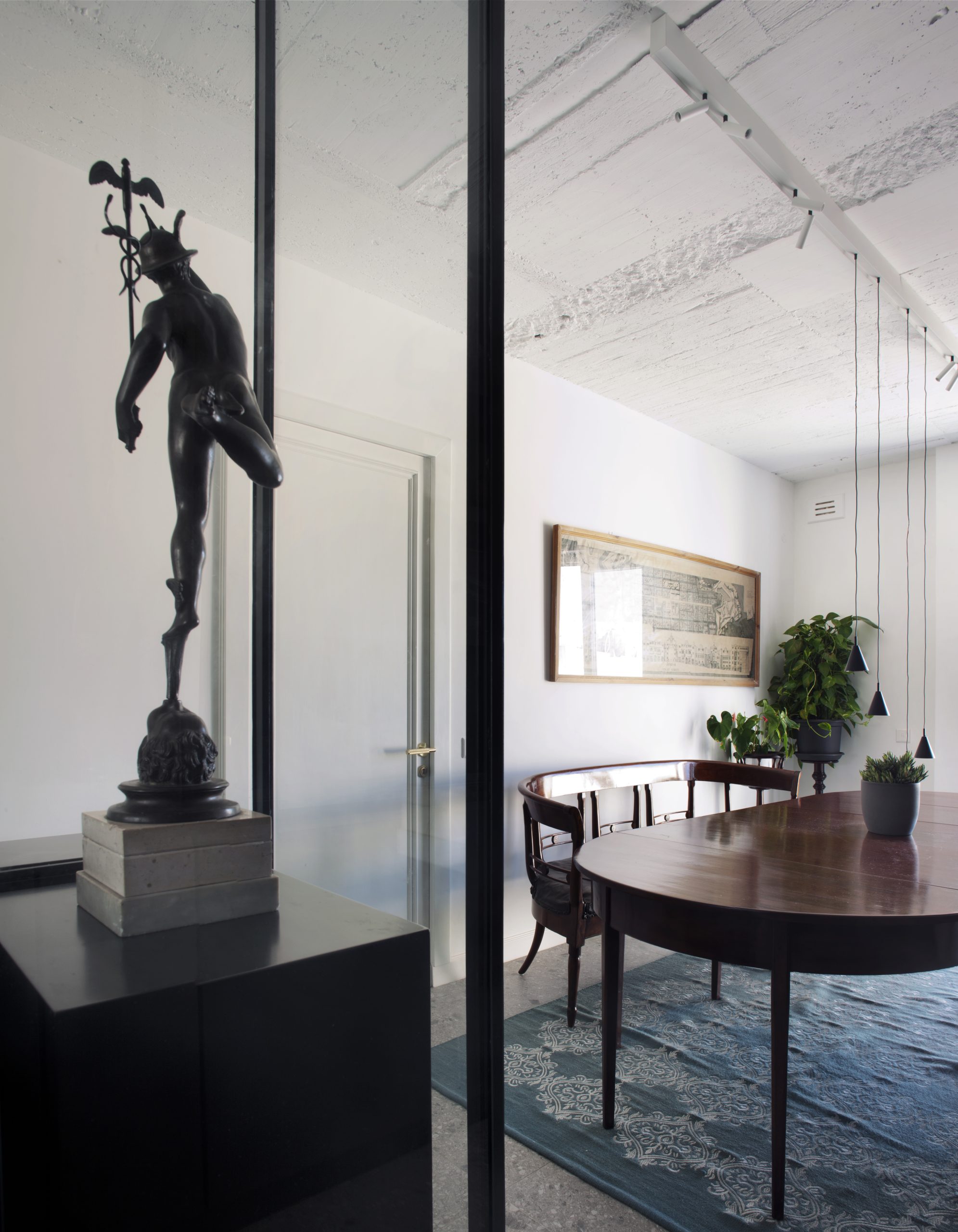