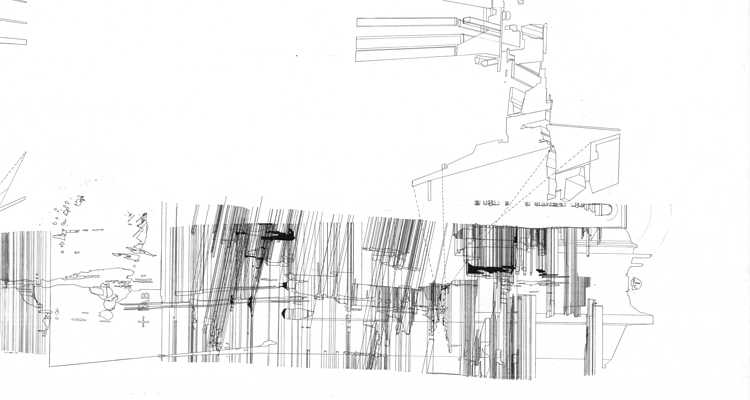 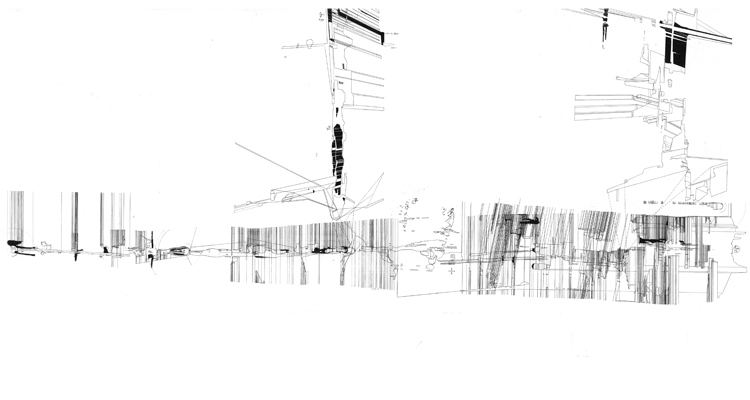 This project originated from work sent by ; a screed drawing on with graphite, water base medium and . A screed is a time related action that involves paper, medium and a squiggy that is moved across the paper in a continuous movement. The resulting form on the paper is the result of, the variable force of the body moving the squiggy accross the paper, the density of the medium and its location on the paper and the medium resisting the paper. The resulting mark indicates what was possible with all variables in play, in spite of the resistance of all

The drawing made on the basis of Jon’s screed drawing, investigates the moments of resistance as it characteristically made form on the paper. Every change in direction, form and grey scale indicates a change of one of the constantly changing parameters. although it is impossible to retrace the status of each force, it is possible to note change. The drawing articulates those changes by Lines of Resistance, running perpendicular to the main directional movement. These lines form intersections through the movement of the drawing. the lines of resistance articulate the drawing as a time based movement, as if they are scanning the drawing, starting at one end and ending on the other, forcing the observer to engage in a similar

Lines of Resistance investigates an obsession with form, reducing it to a selective contextual scan of a given context and at the same time denying it its prevalence by tying all of its movements with an intersecting line. the intersecting lines interfere with form and throws it off balance. It changes it’s original status as a recognizable form and allows for different readings